Paris is not known as a budget travel destination and yet the city is replete with sights, activities and experiences that don’t cost a sou (former French coin).

Telegraph Travel expert Hannah Meltzer shares her guide to the best free things to do in Paris.

If you are visiting the city in the summer months head to Paris Plages, the popular ‘beaches’ (with deck chairs and ice cream sellers) which pop up on the banks of the Seine and Basin de la Villette from mid-July to August. The attraction, now in its 17th summer, offers more each year – most recently overheated city-dwellers had the opportunity to actually swim for the first time in the Bassin de la Villette. Without spending a penny you can soak in the atmosphere of lazy pétanque games and cool off under the giant cold air showers. 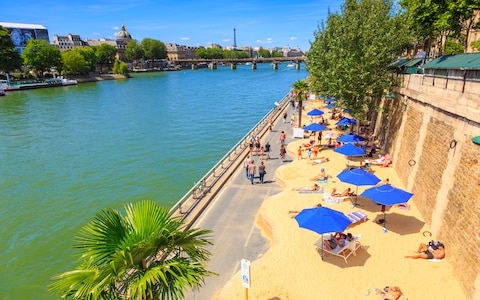 At the Paris Plages you can soak in the atmosphere of lazy pétanque games and cool off under the giant cold air showers. CREDIT: © PAWEL LIBERA 2013. ALL RIGHTS RESERVED/PAWEL LIBERA

Wander the sleepers of a disused railway line

One of Paris’s best-hidden curiosities – even for Parisians. La Petite Ceinture or ‘little belt’ is an abandoned railway line that once encircled Paris inside Napoleon’s Boulevards des Maréchaux. Disused since 1934, the first section has been reopened to the public and can now be explored in four of the city’s outer arrondissements. It is an unlikely pocket of biodiversity, with an abundance of wild flowers, contrasting pleasingly with the industrial starkness of the old tracks. There’s also a surprisingly high number of plant species and animals, from foxes to bumble bees.

Hang out with local artists in an erstwhile squat

This former squat, now a protected not-for-profit space, is located on Rue de Rivoli between the Louvre and Châtelet. It houses 30 artists’ studios across six levels and the public are invited into the workshops six days a week. There are several permanent studios and rotating places, so you will see a wide range of art – from sculpture, to colourful collage, photography or more traditional portraiture. This is a marvellous opportunity to get a glimpse of the Parisian art scene, but you should also be respectful: say ‘bonjour’ and ask before taking pictures of the artists’ work.

The distinctive green metal boxes of the riverside ‘bouquinistes’, or book-sellers, are veritable Paris icons (they have been recognised as a Unesco World Heritage site). The placement of the stands was set by the state in the 19th century and today there are still only 240 designated sellers. Peruse the curious selections of yellow-paged novels, retro fashion magazines and back issues of Tintin, which in recent years are also accompanied by tourist trinkets and postcards. Wandering the length of these stalls, a picturesque route that takes in Notre-Dame, is a wonderful way to spend a sunny afternoon.

Have a picnic by the canal

Mix in with young, trendy types and drink in the lovely view with a picnic on Canal Saint-Martin. As soon as the sun arrives in Spring, you’ll find locals lining the sides of the pretty bridge-bedecked canal (immortalised in Amélie), sipping beer and eating picnic food bought in one of the nearby supermarkets. This is a great way to start a balmy spring-summer evening and you always have the option to move on to the lively bars of the area after. The canal is car-free on Sundays, so this is a great time to go.

Get a taste of noble Paris

It is possible to walk in front of the vast doors of Hotel de Sully on Rue Saint-Antoine and have no idea about the magnificent mansion courtyards inside. This exquisite Louis XIII-style hotel particulier, formerly belonging to the Sully family, dates from the 17th century when the Marais was the place to be for the French nobility. Look out for the ornate carvings on the façade, including allegorical figures depicting the seasons and the elements. Stop to listen to the birdsong in the tranquil gardens before emerging on to the magnificent Place des Vosges (another great spot for a picnic).

Soak in the atmosphere on the steps of the Sacré-Cœur

On a summer’s evening, splash out on a €6 (£5) bottle of wine from the supermarket (that will buy you a decent bottle) and head to the steps of the Sacré-Cœur on the hill of Montmartre. There is always some kind of street entertainment here, ranging from fire jugglers, buskers strumming guitar covers and footballers performing amazing keepy-uppies. If you head here in the evening, the atmosphere is generally lively but friendly, but as with any densely packed city spot, you should be vigilant with your belongings and keep your valuables close.

La Campagne à Paris (The Countryside in Paris) may be one of the French capital’s best-kept secrets. The mini-village, which sits atop a small mound in the un-touristy 20th arrondissement, is comprised of 92 impossibly quaint houses. The area, which is just a few minutes from Paris’s ‘Périphérique’ ring road, is a bucolic enclave of window boxes, wisteria and pastel colours. The village was founded as a cooperative intended for working families – today the houses are rather more expensive. Conclude your trip with a wander to nearby cultural hotspots La Bellevilleoise or La Maroquinerie.

Discover the city’s most underrated church

This vast Gothic church that stands over the Les Halles-Montorgueil district on the Right Bank is Paris’ second biggest church after Notre-Dame and yet receives only a fraction of the footfall. Its magnificent gothic nave and vaulting combined with Rennaissance architectural detail are reason enough to visit, but it also has stained glass dedicated to charcuterie and a tryptich by New York artist Keith Haring. There are also regular modern art installations in the chapels and a sculpture depicting the last food market at neighbouring Les Halles, before it moved out to the suburbs.

Enjoy one of the city’s few free fine art collections

Built in 1900 for the World’s Fair, along with its bigger sister across the street and Pont Alexendre III, the Petit Palais holds one of the few free permanent collections in Paris. The fine arts museum spans antiquity, the Middle Ages, the French and Italian Renaissance and Flemish and Dutch paintings. The French collection takes in Monet, Renoir, Delacroix Toulouse-Lautrec and more. The Belle Époque building itself is worth lingering for, with its vast galleries, grand arched windows and painted domes. Take a minute to pause in the charming peristyled courtyard garden.

• The best restaurants in Paris

Tags: The finest free things to do in Paris